There’s an interesting story on the BBC about an Ethiopian gentleman who is taking war’s leftovers and converting them into coffee machines.

He uses old mortar shells, which stand about one metre high, to make his coffee machines.

He cuts off the pointed ends, seals them and puts holes into the aluminium cylinder. The cylinder channels the water, coffee and milk.

Read the rest of the story 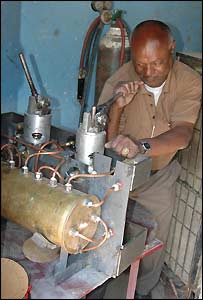