For a baby to use it to learn how to walk it is very simple. The baby holds the horizontal bar at the top with the hands at both ends of the bar and he stands up on his/her feet and start pushing the walker. Two to three falls will get him or her to start being on his/her feet by him/her self and by the 7th to 8th falls, he/she should start moving the legs on his/her own and before you know it, your baby is walking.

This walker is simple, no ring bells around to keep the baby off focus on learning how to walk.

Simon Kasiraba is one of many sausage vendors found in the cities and small towns throughout East Africa. He’s the prototypical micro-entrepreneur trying to make a living by supplying a need (food – conveniently available). He’s on AfriGadget because of the simple innovative solution that he employs to keep his food ready to be eaten at all times of the day – which is very important when you’re set up beside a bus stop. 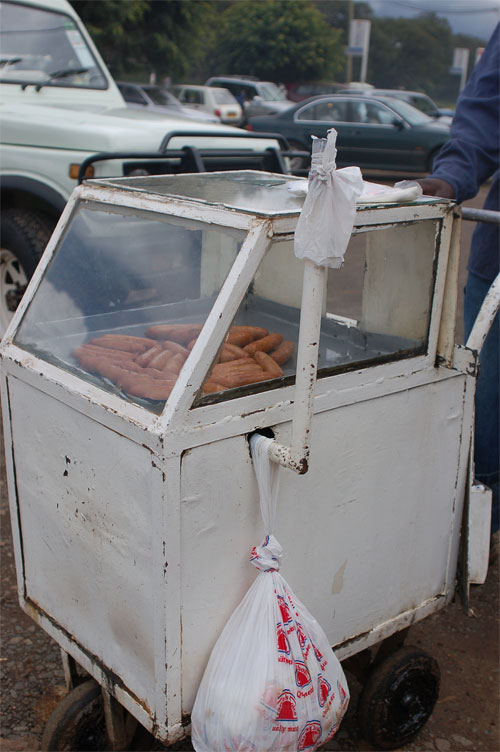 He keeps the meat warm using steam, with a simple charcoal heater placed inside the body of the sausage cart. The water goes into the pipe on the side of the cart, and floods a water panel directly underneath the meat. When it gets hot, the steam keeps the sausages warm, yet juicy. The cart cost him 14,000 shillings (about $200). He sells each sausage for 10 shillings (about 0.14 cents).

Here is a video of Simon showing me his sausage heating cart:

Images of the sausage heating carts can be found in the AfriGadget Flickr image pool. 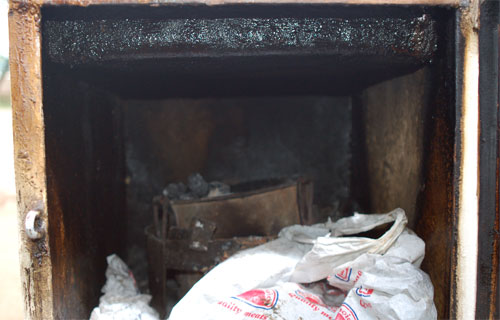 If you have any stories that would fit well on AfriGadget, contact us, we’d love to hear from you!

First off, I’d like to thank the thousands of readers who visit AfriGadget every week. It’s been great to see the amount of interest that innovation Africa-style engenders. I’d like to give a little update on what’s been happening and where we’re going with AfriGadget in the near future. If you’d like to help in some way, please contact me.

AfriGadget Flickr Group – We have an image gallery on Flickr that you can take part in. Tag your images “AfriGadget” and add them to the AfriGadget group.

Website Redesign
This has been a long time coming. The current site has some problems that we’d like to “fix” via a redesign. We’ll still be using WordPress, but want to make it more accessible and increase the breadth of information available. Feedback indicates that people like the look and feel of the current site, so we’ll try and stay pretty true to what you see now.

There has been an ever increasing number of emails asking for more information on specific projects, as well as a great deal of interest from people who want to purchase some of the items that we’ve shown on AfriGadget. We’re going to be building in some of those features into the new site.

Helping Micro-Entrepreneurs
I’ve had a number of interviews by different media outlets over the last couple months, and one specific interview by a South African radio company really hit me. They asked, “How does AfriGadget help the Africans who are beings showcased?”. I didn’t have an answer – or, I did, but the answer was “not at all”.

In the new site, we would like to work with an organization like Kiva, and their partners, to create ways for people to invest in some of the entrepreneurs that we talk about. In the cases where it makes sense, we’ll also help the entrepreneurs sell some of their items via our website.

Growing AfriGadget
The website initiative is only one of the three that we’re planning for this year. If we can find the right partners, we’ll be announcing some projects that a couple AfriGadget editors will be leading that are, quite frankly, much more exciting and “big” than a website redesign. As we grow AfriGadget we’re looking for partners who can help us. Contact me if you’d like to know more about those initiatives!

All of us do AfriGadget on the side. The growth of the site that I have outlined above is meant to benefit the innovators in Africa, not those of us who manage and create content for this site.