I’d like to upload some of the video from today’s first big day in Ghana, but bandwidth considerations make that a little difficult right now. Instead, I’ll give an overview and show some pictures.

Henry Addo is a colleague of mine at Ushahidi, and he’s also the Ghanaian representative who is helping me hand out the bags, do interviews and have fun… He’s also a motorcycle rider, so I made sure to pack my helmet before leaving. We set off in search of likely prospects for both the FLAP bag project and Maker Faire Africa. 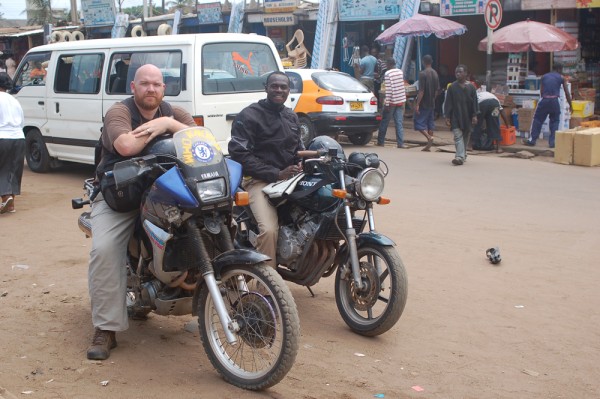 I started out on a 250cc Honda streetbike that made me feel a little like Bowzer in Mario Kart. Fortunately, our first stop of the day was at Henry’s local motorcycle street mechanic at which I saw a beautiful 600cc Yamaha Terere being fixed up. The owner happened to be there, and he was game for a 2-day swap (with about $10/day thrown in for good measure…)!

This was also the first place that we started showing off one of the assembled bags to gauge the kind of reaction that we would receive from people. We didn’t do any formal interviews here, but had a good time of questions and people came up with some interesting thoughts on the use of the bag. 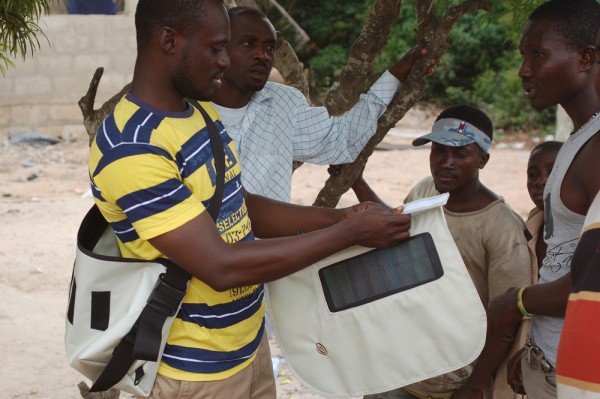 The head mechanic absolutely loved it, recounting the many times he was traveling around Ghana and needed light at night to fix his motorcycles.

The real estate businessman wanted to know the cost, thinking he would buy one right now for $100 from us (for bragging rights). Though he thought there was a market for them in Accra, that the real buyers would be found in rural villages.

The used-goods businessman wondered what would happen to the solar system if you tried to wash it to clean the bag. I didn’t have an answer, but I said that I thought it would be durable.

We ran all over town trying to find tailors of adequate skill to assemble the bags that had come in pieces. It turned out being a little bit of a challenge, but things took a great turn for the better and we found 2-for-1 going on in a market. Elijah and Mohammed both traditionally use West African cloth to make both jackets and bags, however, they were game for this challenge (especially as it scored them a free bag). 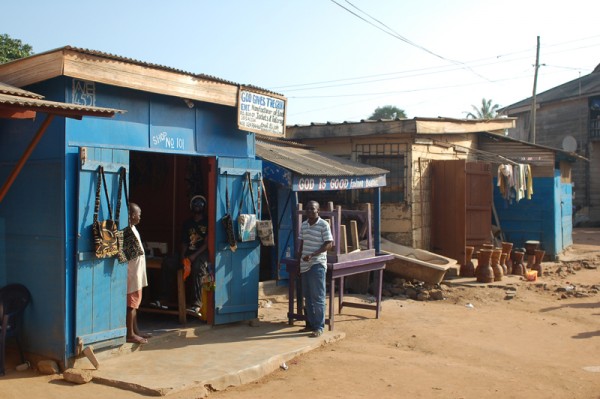 Both tailors spent a great deal of time examining the textiles used and they made comments about the quality level of the bag. Interestingly, they didn’t think they would use the bags that much themselves, but they did think that their wives would find them useful.

I did full interviews with both of them, and will upload those in the near future. Henry will be going back to them in 2-3 weeks to see what has happened with the bags and how they are being used. 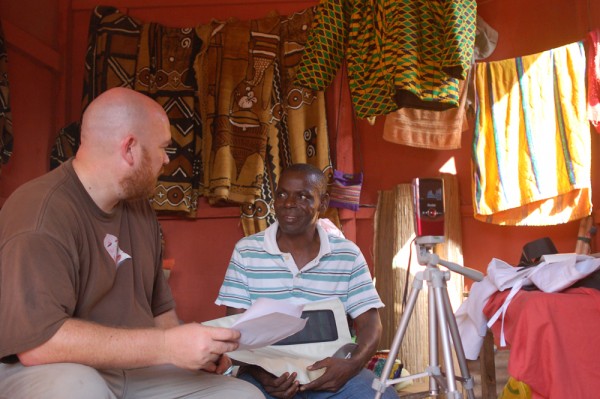 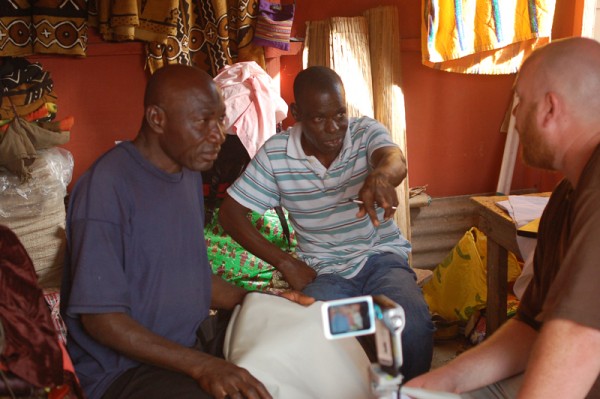 Knowing that we wouldn’t find too many others that could make the bags from the pieces we had, we also wanted to challenge them to something even more interesting. We asked what they would do if we gave them a basic portable light kit (2 solar panels instead of 1) and tried to make a bag with it, using traditional cloth elements and no set design pattern. Both decided to give that a try as well, with the caveat that some material would be hard to find, and we’ll report back on the outcome.

I’m scrambling to put my bags together for Ghana, as I leave in just a day for Maker Faire Africa. There’s only one problem, I don’t have everything that I need, and I’m waiting on a shipment from a California bag company. The good news: I’ve just been told that I’m no longer sworn to secrecy, so I can begin telling the story. Here is the FLAP bag project story (from my perspective) and AfriGadget’s involvement in it.

Four months ago the Pop!Tech team approached me about their collaborative project with Sheila Kennedy of the Portable Light project, who showed off her solar TB blanket at Pop!Tech 2008, and Timbuk2, the well-known messenger bag company.

Their plan was to develop a bag that has the potential to bring the benefits of portable power to selected global communities around the globe, and they were hoping the I could help with distribution and testing within the African communities that I frequent, where power is crucial. Of course, I jumped right in, this was just too intriguing to not do so, plus I have great admiration for all of the players: Pop!Tech, Timbuk2 and Sheila Kennedy.

FLAP stands for Flexible Light And Power. The flap on the messenger bag has the single solar panel on it, connected to the tech tray, which has an on/off switch, an LED light and a USB connection. So, in concept, the bag can be used as a portable lighting and power supply unit for anyone. Most useful however, to those lacking consistent power for devices or an electric lighting option.

This bag will be the official Pop!Tech 2009 bag, and will also be sold by Timbuk2 sometime after that. It’s a unique bag that has the potential to change the way a lot of people (not just in Africa) do things. I don’t have detailed information on any of that, so look to the Pop!Tech team for more information on availability.

Due to my fairly extensive travels, dealing with just the right cross section of potential users for the bag, I was in the right place to distribute some test bags for feedback from end-users. My job, over the next three weeks will be to find the right types of people to give a bag to, interview them before and after, and report back on my findings.

My first stop is Ghana, then on to Kenya and Uganda. I have 10 FLAP bags, with plans to hand out 4 in Ghana, 4 in Kenya and 2 in Uganda. To do the interviews, I will have the help of Henry Addo in Ghana (also a colleague or mine at Ushahidi), and with David Ngigi in Kenya (a young videographer and friend). Pop!Tech has supplied us with small video cameras that we’ll be using for the interviews, as well as some starter questions and types of individuals that they would like to see get the bag.

My objective is to find people from many walks of life, from taxi drivers to citizen journalists, and from roadside food ladies to seamstresses. One of my questions is this: can much of this bag be created from locally available materials?

My main goal: find out if it is useful, usable and if its adaptable to everyday life in Africa.
The Challenge: asking people how they would adopt these kits, looking for inventiveness.

I won’t be sugar-coating my own reviews, nor those of the people who we interview.

Tune in for more tomorrow

My next post will be pictures of the kits, unboxing of the items that I have received and my initial opinions on them. I’ll also be doing some personal interviews (video diary) of myself throughout the weeks ahead, giving some insights into the day’s events and overall thoughts on the FLAP bag project.

Additional updates from the manufacturer and from the project team will be found on the Pop!Tech blog and the Timbuk2 blog from time-to-time.