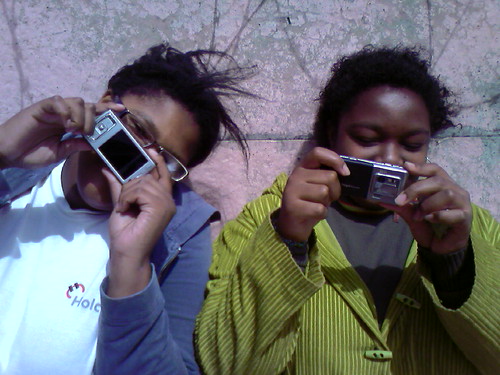 Thanks to the kindness of AfriGadget readers we were able to take a simple idea and far exceed expectations. We were looking for a mobile phone for our two young ladies in South Africa to start doing some AfriGadget mobile phone reporting on. Instead, we raised extra money and had 2 more smart phones given directly to the project!

We’re off to the races with the Sony Ericsson C702 that you helped us buy, and the Nokia N95 that David Sasaki provided to Zintle and Lukhona when he was in South Africa earlier this month (pictured above).

The new phone from Michele is going into my bag with my Nokia N95 as I try to find another two mobile reporters in some other countries in Africa. I’ve got one eye on a likely candidate in Kenya, but want to try to get outside my normal stomping grounds in East Africa. If you have an idea of someone who has a good multimedia eye, likes to tell stories and would be good for AfriGadget, send them my way please.

These two individuals went far beyond what we expected and actually gave their Nokia N95’s to the project:

Again, a big thank you to everyone who helped make this a reality. Let’s see if we can grow AfriGadget from the grassroots up.