We’re back online with our old blog! What started in 2006 by Erik Hersman, founder/co-founder of Ushahidi.com, Brck.com and other ventures, was quickly turned into a group blog, which featured various authors from around the world. Our mission: To showcase innovative humans who come up with different solutions to problems in environments that lack industry norms, access to professional tools, a supply of the right materials or just anything that is not made in a factory.

In Kenya, where most of our authors grew up or live in, this approach to problem solving is often called “jua kali”, as in “working under the hot sun”. Steve Daniels, former advisor at the now defunct Makeshift magazine, created a wonderful paper called “Making Do – Innovation in Kenya’s Informal Sector” in 2010 on this innovative culture that we never really mentioned on this blog: 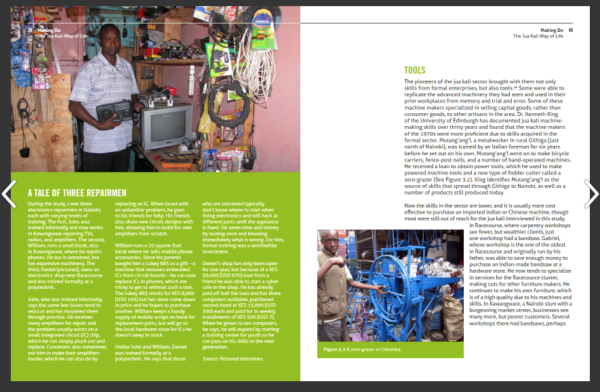 AfriGadget.com wouldn’t exist without this jua kali spirit, and it doesn’t matter if you live in India and call it “jugaad“, heard about the DIY culture in Cuba during the Castro years or experience all of this resourcefulness yourself when you live in an economy of scarcity and need to solve a problem. AfriGadget was and still is our answer to showcase that in a world of norms, patents, regional, financial and other restrictions, people are able to change objects and create something new out of them. It also is a testament to the maker culture that has always been around.

Back in 2005, we quickly came up with the term “AfriGadget”, as gadget blogs were the latest trend back then and we wanted to show to the world that even on the African continent there are a lot of nice “gadgets” that spice up your life.

Also, many of the innovations (!= inventions) aren’t an Africa-only thing. The knife-sharpening bicycle, for example, one of our popular posts in 2007, talks about a bike that is also used to propell a grinding stone. This bike may be Made in China, the setup may be locally assembled, but is this really an “African” invention – as it is equally found in other parts of the world? We don’t know. And there are a lot of other cool things on the internet in 2018 that may not originate from Africa, but perfectly fit the AfriGadget frame.

This site went offline in 2016 due to administrative and technical issues with the website host. Some data was lost, the last undeleted backup is from 2012. Yes, you should always keep your backups.

We love this blog, the shared stories and often missed linking back to some older content on this blog, so we urgently needed to relaunch this site. We have meanwhile managed to redirect the domain to a new server and are now in the process of slowly recovering old content and will set up a new template. Which means that this website is still under construction and if things aren’t the way they should be or if something important is missing, then please contact us – thank you!

We are active on four different platforms: This website, Facebook, Instagram, and on Twitter. Facebook, Instagram, Twitter provide us with global audiences that don’t have to be directed to a single blog somewhere on the internet. Also, there used to be this service called zero.facebook.com which allowed users in certain countries to access Facebook free of mobile data charges. This in itself is already an interesting observation and a topic for AfriGadget (that someone else should write about – maybe you?), as user behaviour changes when services are free of charge vs. cost money. “A peculiar calling habit”, as the former CEO of a huge telecommunications provider in Kenya once called it, is the result of such financial limits that have a huge impact on how people buy, use and recycle products. Likewise, our Facebook audience is different from the other audiences on this website or even Twitter.

Talking about audiences, there was a popular TV show on Kenyan TV in 2017 that used our tagline, our logo and reported nice stories from Kenya. Unfortunately, we are in no way affiliated with the tv show, the producers never replied to our mails and on the other hand viewers kept on contacting us via Facebook, asking about the products that were showcased on the show. We’d love to help, but we just don’t know better. Sharing is caring. Some producers apparently don’t care. The show is great though and features some of our content that we wrote about in the past:

Whenever we presented AfriGadget to other audiences, we also talked about Ushahidi.com which enabled the iHub in Kenya, a coworking / innovation hub, and we also mentioned all the other hubs that came up in the last few years. We talked about digital projects that are created in Africa but we never really mentioned them on this blog. AfriGadgets aren’t limited to low tech solutions. In fact, there are a lot of very smart things that happen in the digital sphere that could also be termed as AfriGadgets. And not only software tricks that are never published due to software patents or because only a few people understand the magic of programming code. We also talk about business ideas that work in African socities because they target the local user/consumer behaviour. All of those things are AfriGadgets to us. So whenever we mention AfriGadgets, we don’t limit this to some Made-in-Africa wire toy cars (which are great, also because they are the complete opposite to the ex-cathedra teaching still found in many schools, i.e. studying vs. being creative and doing something). AfriGadgets are local solutions to local problems. This site exists to show them to the world.

Still, the low-tech approach is near and dear to us, and one of our favourite sites online is the Low-Tech Magazine that features a reasonable approach to anything low-tech, has lots of detailed information and asks the right questions. Where we only scratch the surface and deliver the audience, the Low-Tech Magazine goes into detail.

AfriGadget also exists because people from all over the world have in the past contributed interesting stories. We got boingboing’ed  a few times and always appreciated being part of a global community that understands the importance of documented innovations. AfriGadget has always been a group blog and we will gladly post your story as a guests blog post. There is a Flickr group that pools very interesting and original AfriGadget material. Some of the photos turn into stories, other are just interesting to watch or are tagged accordingly. There is so much material out there, and in the begining, many contributers wondered why we are sharing normal things that can be found in any African village. Well, to some people they may be normal, to others they are very strange. Which is why we want to encourage you sharing stories, photos, videos, and comments on everything AfriGadget. Just contact us!

If you have previously subscribed to AfriGadget.com using an eMail subscription service such as Google’s Feedburner service, please note that we have lost login data to that service and can not provide any assistance to that and/or change anything about it. In case of doubt, please cancel your subscription and use our RSS-feed instead. Thank you!