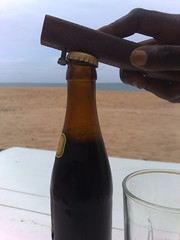 I love African beer. I really do. Even when bad Nigerian beer knocks me down for a week, I am always back for more.

Maybe it’s the efficiency of drinking from 1/2 liter bottles or the romance of relaxing beer-in-hand while watching Simba sex. Either way, a cold Club, Tusker, or White Cap is the only way to end a day.

That’s why I’ve always noticed how beers are opened in Africa. My preference is for the minimalist method of using one bottle to open another, a trick I use to constant amazement in the lower 48.

However, most African restaurants and bars employ boring commercial bottle openers, plain and unassuming in form and function. You have to really be on the lookout to find creative beer release mechanisms – and recently I was rewarded for my vigilance.

Having a cold beer after Togo’s National Run to the Border Day sprint to the Ghanaian border, I noticed that my server was using a non-standard bottle opener.

A first in my observance, she employed two screws in a wooden peg to pop the bottle cap on my Guinness. What simplicity, ingenuity, practicality!

I was in awe until I had a thought: What if she could use only one screw? 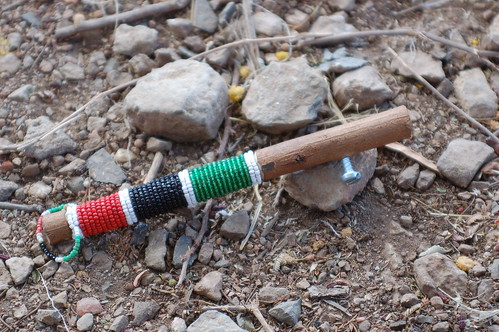 Wayan Vota is part of Inveneo, a non-profit social enterprise whose mission is to get the tools of ICT into the hands of organizations and people who need them most: those in remote and rural communities in the developing world.