One thing that I’ve always been amazed with is the limitless uses that bicycles are put to in Africa. It really is amazing to see them hauling everything from people, to 10 stalks of bananas, to coffins.

The “Black Mamba” bicycle – Low cost, steel-framed, traditional bicycle imported to Africa from England in the 1900s, revolutionizing road transport in Africa. A sturdy and reliable workhorse now to be found in the remotest corners of the continent.

Boda Boda – The bikes found in Central and East Africa used as taxis. The term came from being located on the border. The bodaboda taxis are part of the African bicycle culture, they started in the 1960s and 1970s and are still spreading from their origin (the Kenyan-Ugandan BORDER) to other regions. 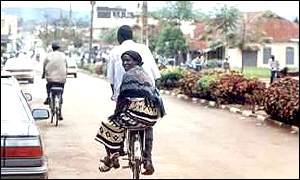 Wooden Bicycles – Handcrafted, locally made bikes using wood and rubber for the tires. Yes, they do have brakes, which are much needed in the mountainous areas of Uganda, Zaire/Congo, and Western Kenya. 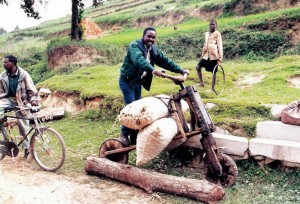 Banana Hauling – I was truly amazed as I travelled through the villages in Eastern Uganda to see the amount of banana stalks that could be loaded onto one of these bikes. The most I ever counted was 12 stalks, but I’m sure that someone out there can say they saw someone beat that recored. I’m digging through my archives for a picture of the 12 stalks, but until then this one will have to do. 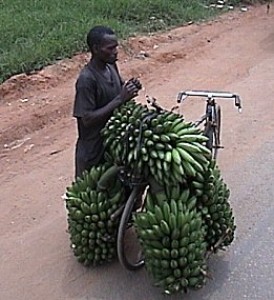 The Fundi – Ahh, the bicycle fundi, a magician with a baiskeli. Using only a pair of plyers, an old innertube and bailing wire he can make your ride new again! Don’t worry, if the innertubes are beyond repair and you have no money to buy new ones, my friend the fundi will show you how to pack grass into the tire to make it like new. 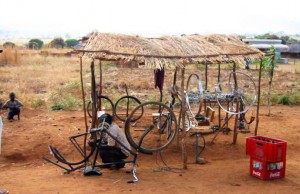 19 thoughts on “Bicycles: Transportation for Everything”