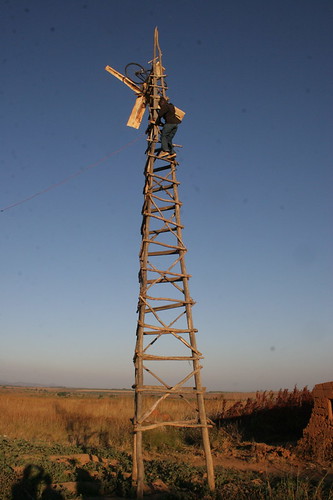 Inspiring, innovative and representative of what Africa’s future holds.

William Kamkwamba is a 19 year old Malawian who built his first windmill at 14. Here he is, pictured just this last week doing some work on his windmill near his home.

The propellers are made of plastic pipes supported by sticks to that they should not bend when the wind is strong and placed almost vertical to the direction the winds is coming.

Unlike in most windmills where the propellers directly turn the spindle connected to the turbines directly, William added pulleys to his machine to increase speed thereby generating more energy.

There are three pulleys and the last is connected to a bicycle wheel. When this wheel turns it turns a dynamo which in turn generates electricity.

Read his blog for inspiring stories about making things work in rural Africa!