Ingenuity, obviously, isn’t only limited to the African continent, as it is especially found in societies where access to resources is limited. While we’ve been able to witness lots of interesting innovations from other regions of the world that were born out of a lack of readily available solutions, we must also not forget that a few smart ideas were actually developed in Africa and have since then conquered the world.

One of such smart ideas is the Ventilated (Improved) Pit Latrine, in short: the VIP – which was developed as the “Blair Latrine” by Peter Morgan, who has been living and working in Zimbabwe for over 35 years, researching and developing water and sanitation technologies. 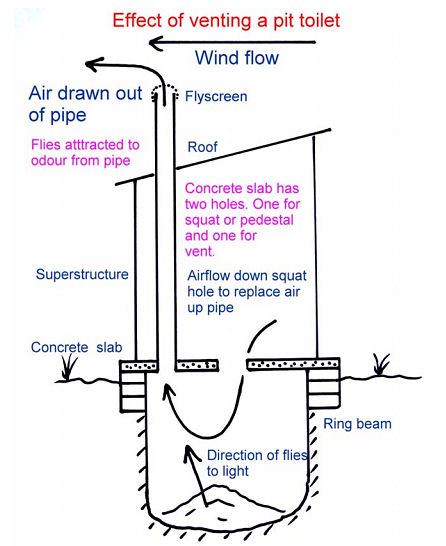 The major advantage of the VIP over a normal pit latrine is that it comes with a ventilation pipe (covered with a durable fly screen on top) which reduces flies and odour. In the absence of other alternatives, the Ventilated Pit Latrine is considered reliable, which explains the success of this technology: over 500.000+ units of this type have been built in Zimbabwe alone and it has proven to work elsewhere around the world.

The VIP clearly isn’t the solution to sustainable sanitation as it comes with a few limitations, but it does function without water and has very low investment, operation and maintenance costs.

Next to some interesting experiments with different water pump systems such as the Blair hand pump (also known as the Zimbabwe Bush Pump) or the spiral water wheel pump, Peter is also active in the field of ecological sanitation and recently published a very interesting booklet titled “Toilets That Make Compost” where he writes about his experiences with compost toilets such as the Arborloo and the Fossa Alterna.

screenshot from Peter Morgan’s manual on how to build an Arborloo (PDF,~ 3,1MB)

While there’s no single sanitation concept that will work in all places around the world, the VIP for one is a proven technology which has been accepted by its users since 30 years.

10 thoughts on “The VIP – an invention from Zimbabwe”