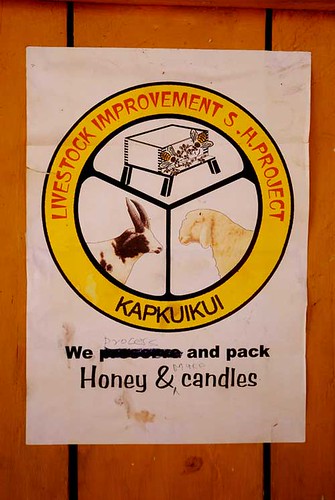 Honey is one of the most valuable products of the drylands of Africa. It can be obtained by following a little bird called a honey guide to a bees nest in a tree, whereupon one raids the hive. Or bees can be farmed…in most places a bee keeper simply hollows out logs to make perfectly acceptable hives for local consumption. for commercial purposes however, Langstroth hives are universally thought to be superior to the traditional log hives found in Africa – the box shape make them easy to stack and move around,  and the movable frames guide bees to build combs in an organized manner making comb extraction easy. These hives also have a queen excluder, a mesh grid, usually made of wire or plastic, sized such that worker bees can pass through but the bigger queens cant. This keeps the queen from laying eggs in the honey combs called supers leading to cleaner honey. There are so many NGO’s, GOs and religious Orgs introducing these bright yellow langstroth hives across the Kenyan landscape.They don’t always catch on though – in rural areas people still prefer the logs…

Traditional log hives are hollowed out logs usually cut from specific tree species with the permission of the local chief. They are hung high in trees and the inside is rubbed with leaves of plants that attract bees – a practice that has been going on for eons. The bees enter the hives through a tiny hole and build their combs willy nilly throughout the space, it’s inefficient and the honey is of a lower quality as the larvae are all mixed up with the honey combs. Not very good for a business approach… or should I say Beesness?.

Logic would suggest that the Langstroth hives which produce cleaner honey and they save trees should be favoured right? Wrong! These modern hives are produced by experts in cities and cost a good $100 – far beyond the reach of anyone living in rural Kenya. It’s also rumoured that these hives are easily broken into by honey badgers, over heat in the dry climate of north Kenya driving bees away, and are expensive to maintain. On a personal note, I for one, find them extremely ugly too.

One bee keeping cooperative in Bogoria has figured out a cunning way of modifying traditional log hives to produce more honey. A bee excluder is made using coffee mesh.

Symon demonstrated how beeswax tracks are laid down to guide the bees where to build their combs in neat lines. Cost? One third of the Langstroth hive.

The honey is collected at night by naked men (yes totally naked …) they say that this prevents one from getting bees stuck in your clothing… I asked about the possibility of getting stung in sensitive places, they said the bees were far too civilized for that…but yes, people had fallen from the trees and been found comatose and butt naked at the tree base…

Raw honey with comb is sold to the local cooperative where wax is separated from honey. The machine is another jua kali item bought in a workshop in Nairobi.

Bees are smoked out of the hive using a home made smoker.

Using a jua kali gadget for making candles, comprising a string, a piece of conduit pipe and two beer caps….ingenious!

Producing the sweetest smelling cheapest candles I’ve ever used. They claim they burn much longer than paraffin candles. Besides they smell delicious

· The dry lands of Kenya are the important honey producing districts in Kenya – the semi arid climate, diversity of flowering plants and easy access to fresh water makes it perfect for bees. Kenya is the fourth largest producer of honey in Africa 22,000 tons, China is the worlds largest producer at 299,000 tons (USA produces 70,000 tons) (figures for 2005).

· The group in Baringo produced 8 tons of honey last year.

· Kenya is a world center of bee diversity with over 3,000 species (about 10% of the worlds total number of species)

· Only 150 species or thereabouts produce honey in Kenya.

· Contrary to popular belief, most bee species are harmless… they have no stings

· In many pats of Africa, honey is an important component of dowry or bride price – a kilogram being made as part payment for the bride – symbolic of the sweetness of sex – or so I’m told 😉

· Bees pollinate most of the crops that we eat

· Bee keeping is most productive in natural habitats, and is a one of the few forms of resource extraction that does not destroy the environment.

· Bees in USA and Europe are disappearing fast – a condition described as colony collapse disorder (ie. Nobody knows why it’s happening). Africa is unaffected so far making honey production a very sweet deal.