A guest post by Kahenya, Founder of Simple Community

The name William Kamkwamba might not sound familiar to many, but he is one of the most significant technology game changers in Africa. He did not design the most glamorous device on the planet, and neither was his creation unique. However, it was extremely significant.

Using just a book, Kamkwamba, now 25, designed and built a windmill that generated electricity and pumped water in his home village in Malawi. This was significant because he proved that it was possible to build things with instant grassroots impact that did not require a business plan, a website, a marketing strategy, a funding strategy or even a glamorous launch. He gained instant fame.

Kamkwamba managed to ensure that he could meet his immediate power needs using tree branches and scrap material. He was able to generate electricity and pump water using pure green energy. That was a decade ago. 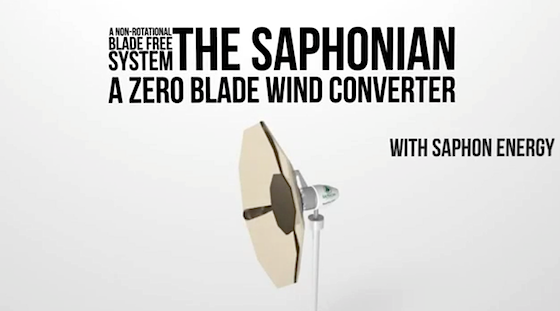 Enter the future and a decade later, we have the Saphonian Blade-less wind turbines – another African design, this time from Tunisia. It focuses on clean energy.

The inventing company, Saphon Energy, led by Mr Anis Aouini, understood that older generation turbines, built in Europe, had some fundamental flaws that no-one had resolved.

For one, they generated a lot of noise and vibration. There is the unmistakable whirring, and if you live next to one, unless it is not in motion, you could have sleepless nights before getting used to the sound.  They also unwittingly kill a lot of birds. Unaware birds collide with the blades and get killed.

Not the Saphonian. It has a sail shaped body, similar in concept to sails on a boat or dhow, which makes it bladeless. The unit does not have the famous rotating blades common with older generation turbines and windmills. Even better, the advantages are not limited to aesthetics or providing environment friendly energy. The Saphonian eliminates inefficiencies usually created by moving parts in a windmill.

The lack of blades and other rotating gears means that there is very little aerodynamic energy, and this results in improved power generation. It also reduces mechanical losses. Thus, the Saphonian has been found to be about 2.3 times more significantly efficient than conventional turbines and windmills. It also means that due to the hydraulic system, the Saphonian is able to store energy, which enables it to supply a steady flow of power, provided there is wind flowing or there is energy stored in the system.

In ordinary systems, whatever is generated has to be consumed instantly. National power grids usually supply the exact amount required. This means that when demand exceeds supply, there will be some places without power. On the other hand, excess energy, not being stored, would go to waste.

The storage capability of the Saphonian is therefore significant. Further, the equipment is cheaper to produce than conventional systems. It costs 45 per cent less to develop and deploy a Saphonian Blade-less turbine. With customisations, that cost could be further reduced.

Saphon Energy has tested a 300–500 Watt system as a prototype. It has performed better than was anticipated. The company is now focused on developing a second generation prototype that in many instances, will improve on the hydro-mechanical performance of the first generation unit.

What will matter for this development and its growth is how many national electricity providers deploying wind infrastructure decide to use this more cost effective technology. The Saphonian has proved that Africa can actually improve on previously available technologies that were not as efficient as they could have been.

For William Kamkwamba, this would be a climax to his dream, that affordable energy solutions developed in Africa could actually compete with foreign platforms and even outperform them.

As Africa struggles to meet electricity needs for a growing population, it is necessary for the continent to develop its own home solutions suited for the environment and the pocket. Convenient and relevant innovations such as the Saphonian stand a good chance.

It is no wonder therefore that the Saphonian has won its parent company the KPMG innovation Grant for 2012.