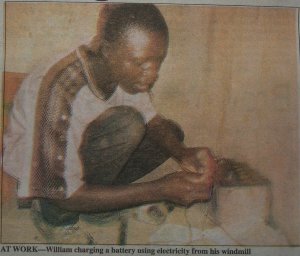 A young man has created a windmill out of spare parts in Malawi.

William Kamkwamba says one day while reading he came across two books, Using Energy and How it Works, which are about generation of electricity using a windmill.

On a trial and error basis, he managed to make a small windmill which generated electricity enough to light his dorm. Seeing its success he planned for a bigger one so that his parents could benefit and some well-wishers gave him money to get some of the materials he needed.

In total, he spent a total of 2200 Malawi Kwachas, which is equivalent to $16. William is saving his family money on home lighting expenses, recharges people’s mobile phones and radio batteries, and also charges his own automobile battery for backup power.

Unlike most windmills, where the propellers turn the spindle connected to the turbines directly, William added pulleys to his machine to increase speed thereby generating more energy.

There are three pulleys and the last is connected to a bicycle wheel. When this wheel turns, it spins a dynamo which in turn generates electricity. 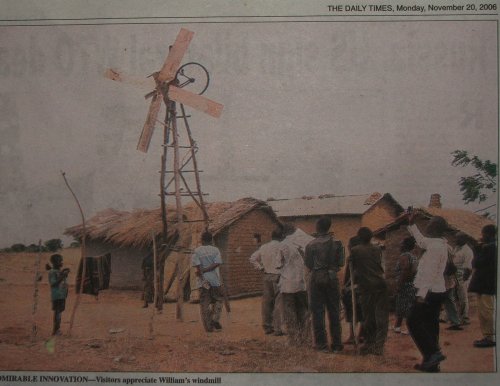 68 thoughts on “Homemade Windmill in Malawi”