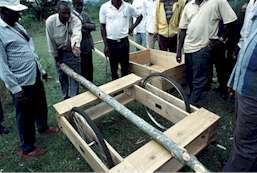 Practical Action is a group that endevors to help solve problems in developing nations from the perspective of those in poor or rural areas. One of their projects is to help solve transportation needs.

The programme employs the following to improve transport:

The karts shown here were designed to carry 180 liters of water. The owners make money by either hauling goods, or by leasing out the kart to others.

One thought on “Karts for Rural Africa”