Over the weeks since the first post we did on Dr. Cedrick Ngalande’s inexpensive power source for Africa, we’ve been emailing back and forth about his invention. Yesterday, he sent me a link to a video of his device on YouTube.

“The rotor moves slowly most of the times but does pick up at certain intervals. This process continues for many hours. Since the rotor is quite heavy (and hence more inertia) a small geared DC motor can be connected to the rotor to generate power for cell phones, $100 laptops, and other things in Africa. People can leave this thing to charge their phones/$100 laptops overnight.”

“Basically we have two chambers on either end of the rotating (pivoted) rod. The arrangement of the chambers is such that on either side of the rod, one chamber sits on top of the other (this is important). At the beginning of this operation, I fill the bottom chamber on each side with a yeast sugar solution. Each bottom chamber is always locked under pressure by special valves. Due to pressure the solution starts moving from a bottom chamber into its respective top chamber. Note that by moving upwards, the fluid’s center of gravity shifts, resulting in a mass imbalance which causes the wobbling.

It should move slightly faster that what you see in the movie – it’s just that my values were a bit faulty and couldn’t hold all the pressure properly.” 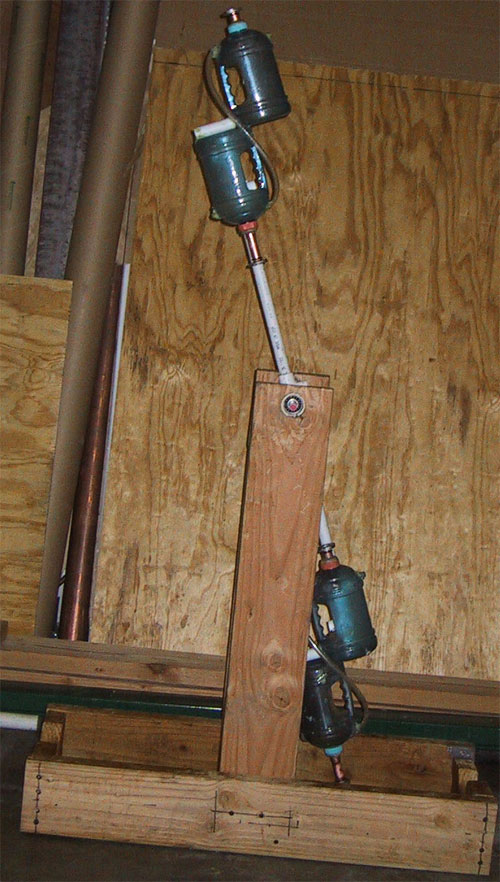 Dr. Ngalande is looking for investors so that he can manufacture, market and sell this low-cost generator in Africa.