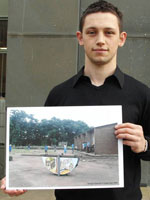 The BBC is running a story on a young inventor, 23-year old Daniel Sheridan, who has designed a teeter-totter (see-saw) that can be used to power school classrooms in Africa. His ultimate goal is to see a whole playground of energy-creating equipment.

“The current need for electricity in sub-Saharan Africa is staggering. Without power development is extremely difficult. The potential for this product is huge and the design could be of benefit to numerous communities in Africa and beyond.”

The idea came about after travels to East Africa, where he taught at a school and was inspired by the students. Daniel developed the see-saw power design as part of his final year at Coventry University. He has calculated that five to 10 minutes use on the see-saw could generate enough electricity to light a classroom for an evening.

Some Thoughts
What would be more interesting would be to see this idea built out with local supplies, as Daniel is going to be doing soon in Uganda. Then, with the knowledge learned there, see if it could fall into the same model of micro-entrepreneurial devices that we see with the KickStart water pumps. Speaking of which, this also reminds me of the PlayPumps idea, which also has a lot of potential.

Daniel states, “The unique selling point of this product is that it is not intended as a profit-making design.” I can only hope that he means this as profit for him. Profit making on the ground by Africans of this type of design could be crucial for its long-term success.