The Universal Nut Sheller (UNS) is part of the Full Belly Project. It’s really an amazing story about a device that has had a direct impact on a number of African countries. The story goes that Jock Brandis, an American inventor, was on a trip to Mali and saw some women who had been shelling peanuts leaving them with bleeding hands. This spurred him on to create a device that would help end hunger. 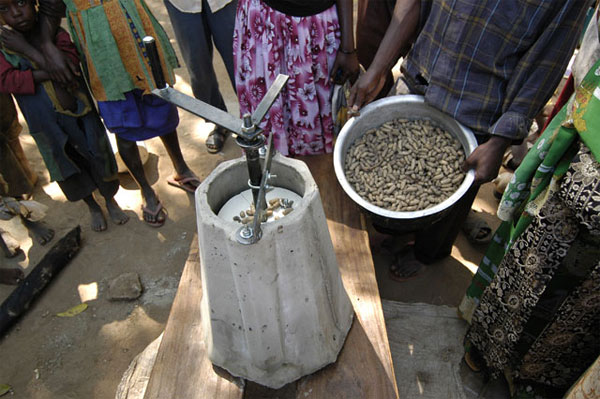 (Watch a video of a pedal-powered one in action)

How does it work?

The process works by centrifugal force and friction. The Universal Nut Sheller is basically a concrete cone within a cone, open at the top and bottom, with the interior cone being solid. The interior cone, or rotor, rotates on a shaft and has an attached handle (Note: only one moving part!). The user turns the handle around fast enough to spin the nuts to the outside through centrifugal force. The nuts fall between the surfaces and are rolled and squeezed, allowing the nuts and shells to fall through to the bottom. This mix of nuts and shells is then winnowed out, the old fashioned way.

Reach and Impact
According to the Full Belly Project, this machine is being used in 12 African nations, including; Mali, Uganda, Malawi, DRC, Gambia, Ghana, Kenya, Nigeria, Senegal, Sierra Leon, Sudan and Zambia.

The nut sheller is being used to shell more than just peanuts. As new villages take up the device, they turn it towards their own diverse nut shelling needs, such as jatropha, neem nuts, shea nuts or coffee.

Most importantly, he Universal Nut Sheller costs about $50-75 dollars to make, depending on the price of local materials, and will serve the needs of a village of 200 to 1000 people.

Like two past projects that we’ve highlighted on AfriGadget, this one is encouraging. Both the recently profiled see-saw power machine (possibly), and the KickStart pumps are based on the belief that sustainable economic growth comes through empowering local entrepreneurs to start, or extend, their businesses. In fact, the plans for the UNS are free and downloadable.

11 thoughts on “Fighting Hunger, One Village at a Time”