I recently had a chance to conduct an email interview with Simon Mwacharo, an entrepreneur based in Nairobi, Kenya who a great example of what George Ayitteh has so aptly described as “The Cheetah Generation”.

Simon owns and runs CraftSkills, a small business based in Nairobi, Kenya that focuses on designing and building self-sustaining renewable energy projects in places not accessible to the electric grid. Craftskills had to date undertaken challenging projects in Kenya, Uganda, Tanzania, Cameroon and Rwanda among other places. Simon, whom AfriGadget first got to meet last summer at TED Global in Arusha, Tanzania, graciously agreed to conduct an email interview with AfriGadget. 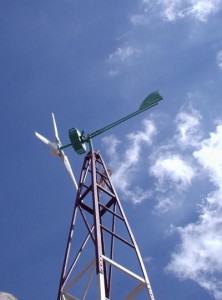 AfriGadget: Could you tell us when and how Craft Skills got into the business of renewable energy in East Africa and the inspiration behind the organization?

Simon: CRAFTSKILLS was found in the year 2000 by myself. I was inspired by a challenge from my rural home where we have not had power for the last 40 plus years since [Kenya’s] independence [in 1963]. I come from a hill side village in Sagalla, Taita Hills in Coast Province where we receive quite some strong wind from the Nyika Plateau. This wind passes through without being tapped and sometimes our roofs can not stand in its way.

I started talking to people about wind turbines and how I can get an affordable one which I can make and produce for other needy people. When darkness falls in these villages plus the fog it is virtually impossible to travel the terrain at night.

AfriGadget: Tell us a little about the people behind Craft Skills and the staff who work for the organization.

Simon: I started with two workers. I could not afford to hire trained people so I decided to train myself first then train my two boys. Then I got a friend who repairs radios and TVs in Kibera to help me design and put together a charge controller.

Now we have a team of 20 people and other partners out there in the field with their staff totaling 50. We have technicians, welders fitters, fiberglass experts and engineers and sales people.

AfriGadget: What is the typical profile of a Craft Skills project? Who is your typical client and how are the projects typically executed?

Simon: Most of our clients are not the owners of the projects we put up. They benefit from the battery charging services in the wind/solar sites we put up with our partners. The low income earners who cannot afford grid power or are in settlements where grid power is unavailable. We take both to do the sites ourselves involving the people on the ground as partners. Others are home owners who have invested a lot on building good homes in non grid areas – these put up turbines for their own use like lighting, and pumping water from wells and boreholes. The other segment is the business people I market areas where there is no grid who put up turbines to run charging centres and sell power to other shops or run their off-grid businesses like lodges and hotels, schools and other institutions.

AfriGadget: Can you share with our readers some of the challenges that Craft Skills faces in executing your projects?

Simon: We have faced cultural challenges where we cannot put a turbine on the most ideal site due to beliefs on such sites hence we have to educate the citizens to allow us to do so or redesign the project and relocate. Another is the financial capability of the citizens we find in these off grid areas.

[As a result of this] we have designed low power product (battery bundles and LED lights) to reach them so that they can be counted as beneficiaries of this new technology.

AfriGadget: Why renewable energy? What is the rationale behind Craft Skills’ exclusive focus on projects that produce energy from renewable sources.

Simon: We were looking for something which is affordable and sustainable and cuts across the economic sectors. Solar was proving to be more expensive, delicate, sophisticated and easily stolen when installed on ones home. We needed to sell people more power at a cheaper rate hence wind was the best candidate.

Wind is everywhere just like solar – one needs to get the right spot to put the turbine as high as they can. Its 24 hrs (Day and Night) and we found a cheap way we could make our turbines take advantage of low wind situations with the multi-pole generator, hollow blades for the propeller, with 90 per cent locally available materials making our technology the best application for this region.

AfriGadget: Which would you say has been the most satisfying/gratifying project that you have been involved with at Craft Skills? What was so special to you about this particular project?

Simon: The Chifiri water pan project to me is most gratifying. This settlement is all arid land pastoral community. The demand for water for drinking washing and watering the thousands of livestock is enormous.

Our turbine provided a cheaper solution for water and lighting the “manyattas” around the water pan. The contractor on the ground is excellent on his construction of the earth dams. His design impressed me that water was going to be available for over 6 months instead of the normal 4 months after the rainy seasons. He made sure the dams were well compacted and fenced to avoid animals hoofing inside the dam – increasing the rate of percolation and lose of water in the ground. Water is only available at the kiosks which are piped and placed near the settlements. The project provides water troughs for the animals to drink from and bathrooms for the people to clean themselves in. Within the fenced dam there is an armed home guard or caretaker manning the place with a security light up the tower hoisting the turbine. 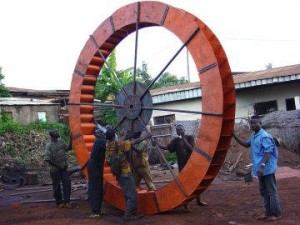 Simon was also interviewed by Juliana Chebet aka AfroMusing, a Senior Editor at AfriGadget on CraftSkills. You can find the video at this link.

I am a committed technophile and music lover - you can find my blog over at ntwiga.net/blog View all posts by Ntwiga