This weekend I’m at Brown University in Rhode Island for A Better World by Design, a conference focused on answering the question, “How can we use technology to improve the world?” The line up of speakers is quite impressive. I’ll be speaking tomorrow on AfriGadget during in the time slot allocated on technologies that can kickstart economies. I speak after my new friend Paul Polak and before my old friend Ken Banks in the morning.

Thoughts from some of the speakers

(Note: I’ll likely keep this as a running liveblog today – as much as I can keep up with it anyway, I’m not Ethan Zuckerman… My pictures will be up in this Flickr set.) 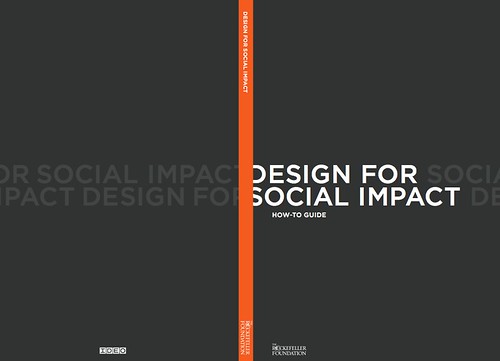 Jocelyn Wyatt of IDEO, comes to the stage asking, “how can design have positive social impact?” They did interviews with 143 organizations and individuals and came away with the following two common themes for their report (download the PDF):

“Frustration with the progress in addressing problems we all care about.”

“Design thinking can make a big contribution to the social sector.”

What is design thinking? It’s looking at problems through the lens of what is desirable by people. Design thinking contributes through empathy, prototyping and storytelling. Empathy is about connecting with people and seeing the world from their perspective, not yours. Prototyping is about building to think – it helps us get answers fast (drawing, legos, etc.). Storytelling is about taking key elements and making them real.

The elephant in the room – there’s a tension between wanting to do the projects and needing to run a business.

When Nature Calls – Architecture in the Face of Change 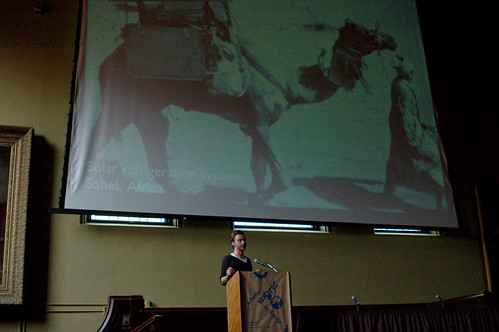 Lukas Feireiss, well known architecture author who wrote “Architecture of Change“, addresses how our new global world sees technology spread to all the corners of the earth. He talks about the solar panels attached to camels that are being used by nomads in the Sahel desert in Northern Africa for refrigeration.

A survival guide for do-gooders

Ross Evans, of Worldbike and Xtracycle is up. I’m a big fan of what Ross is doing, he lives his work. 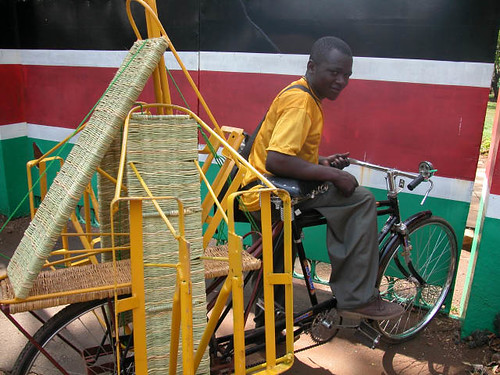 One of his ideas was to build a bike trailer, because he thought it might be useful in Nicaragua, back in 1995. However, he found that they weren’t used much. It’s hard to get the wagon wheels and trailer’s don’t really work well with footpaths. This moved him to a new idea, which was a longer wheelbase bicycle that might work more within that cultural context.

He cautions against galloping in on a white horse. It’s really important to watch what happens after you leave. His idea is “Three – One – Three”. This idea is around intercultural iteration, from the third world to the first world, back to the third world. 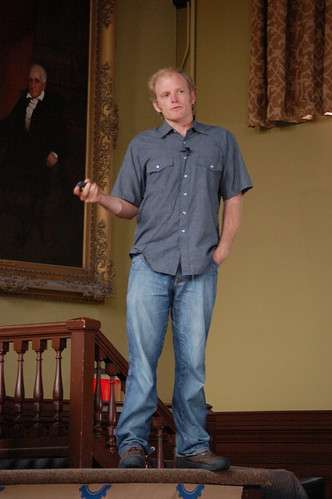 “When you go to a new place, and have an open mind, then you see new things. If you’re trying to solve problems within a context you already have, you’re going to have a hard time.”

Make sure you live with the people that you’re trying to study and help through design. Do what they do – eat with your hands, sleep on the floor, whatever it takes to immerse yourself in that context.

“She who laughs, lasts” – pace yourself and have fun.

“What do you do with naysayers? Thank them for the compost.”

“Start with the assumption that they don’t need your idea.” 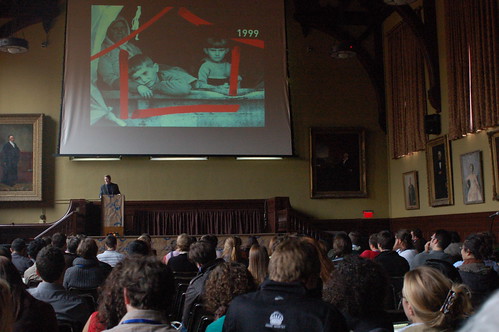 Cameron Sinclair, of Architecture for Humanity, is talking on creating systemic change through design.

Notes: in the wake of these disasters that happen around the world, the design and architecture community:

“We are not humanitarian workers. We are not recovery experts. We arm communities to buld base don sustainable prosperity. After an emergency, people don’t want a house, they want a job.”

It’s important to let communites “own” projects. Let them get involved in the design process, and don’t slap your branded sign on it. A “Ronald McDonald House for Tsunami Victims” strips away ownership faster than anything else. Plus, everyone expects Ronald McDonald to come fix things when they break.

The role of engineers in poverty reduction

Bernard asks, “why do engineering for the developing world?” And goes through the numbers on everything from food supply to water preservation to transportation, healthcare and waste disposal (impressive numbers).

“In the next two decades, almost 2 billion additional people will populate the earth. This growth will create demands on an unprecedented scale.”

Sheila Kennedy, of the Portable Light Project, is showing how they have created a completely customizable solar powered portable light device. She’s giving a really amazing talk about technology use around the world, and how a seemingly small thing (light), can be so game changing.

Clarice Odhiambo, of the newly founded Africa Center for Engineering Social Solutions (ACESS). Clarice was the one running a lot of the Coca-Cola clean water projects in Africa over the last decade.

“There is no country in Africa that I haven’t been to. There has been so much aid pumped into Africa, so I asked, why is nothing changing? They are not in the situation they are in because they are lazy or dumb. They are there because they lack the supporting structures and lacking opportunities. People are idle. People with degrees and who could be working productively somewhere, but there are no opportunities.”

My motto in life is, “Don’t wait for the other person. If the world is to change, it is up to me.”

Basic principles:
It should not be about us, but the sensible thing to do for “the world we leave”. No competition – don’t just duplicate each others efforts. Collaborate for synergy. Generate income while you go about it. When we don’t pay attention and address the effects from our designs, the inevitable happens.

People engage in destructive practices – not by choice, but of necessity (deforestation, pollution, etc…).

7 thoughts on “AfriGadget at “A Better World by Design””