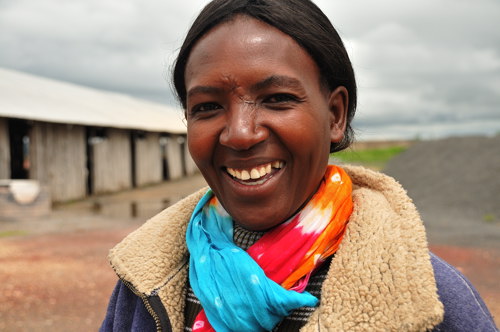 If your dream was to become a doctor and you ended up uneducated and living in a slum, would you just give up on life? Some of us might have, but not Jane Ngoiri. Jane dreamed of being a surgeon, but she was too poor to finish school or go to college. However, today Jane is a Mitumba queen from Nairobi’s Mathare Valley slum. Mitumba is the business of selling second hand clothing that arrives in Kenya from European and American regions in massive bales.

Mitumba originally referred to used clothing but today it includes everything from clothes to shoes, bags and even kitchen utensils. Huge markets have sprouted in Nairobi where the traders buy selected items when bales are first opened, and sell them in nicely arranged stalls elsewhere. It’s easy to see how mitumba provides hundreds of jobs for the juakali but everyone is doing it and the competition is intense so prices and profits are low.  Jane came up with a clever way of getting past this by finding a unique niche. Unlike most Mitumba operators who simply sell second hand clothing, Jane adds value by taking the clothes apart and re-making clothing that Kenyans want for their children, especially daughters. 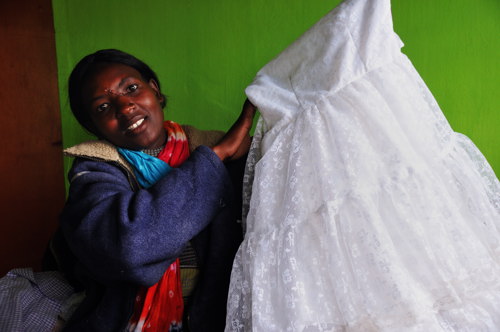 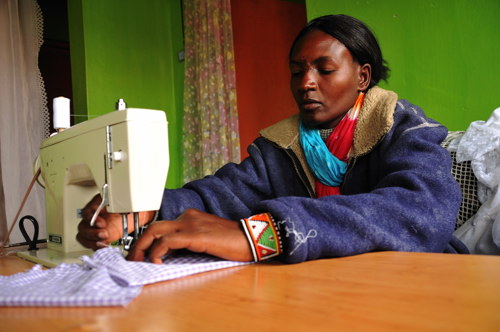 It takes her only 45 minutes to sew each one and she can make and sell up to 40 per month making a tidy profit which has literally allowed her to climb out of poverty. 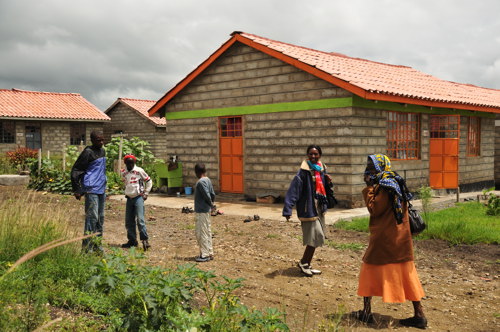 Janes may not be the slumb dog millionaire but her story of escaping a slum life is humbling. I went to see Jane at home – she now owns her very own two bedroom orange and green house in a new housing development just outside of the city. She has running water, sitting room, a huge kitchen with gas stove, an inside flush toilet and solar lighting.

I visited her former home I n the slum,  It’s hard to imagine how anyone could live in a room six foot by five, with just one bed. The mud floor was covered with a plastic mat but the water in the saturated ground seeped through. 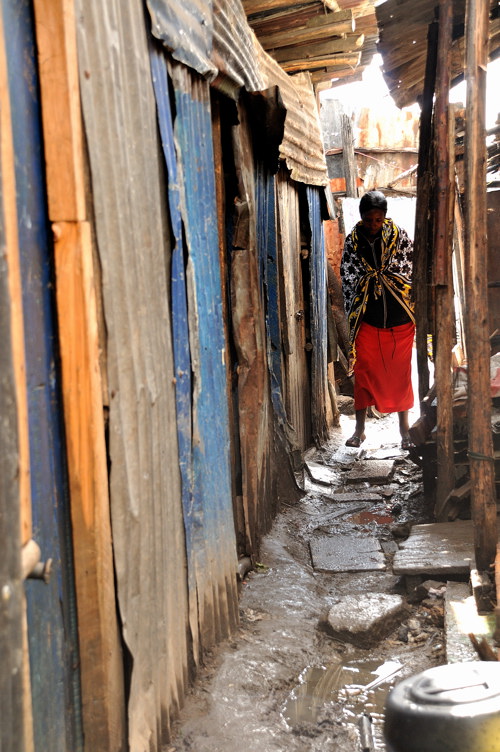 Outside might have been disgusting, but inside the the corrugated iron room was but super neat and carefully arranged. On the bed sat the new tenant, 34 year old Catherine with her two daughters Cynthia (17) and Samantha (3). Her 12 year old son was out. To her right was someone else’s room , and to the left a changaa den (changaa is an illegal distilled alcoholic brew). Behind her were three other rooms. 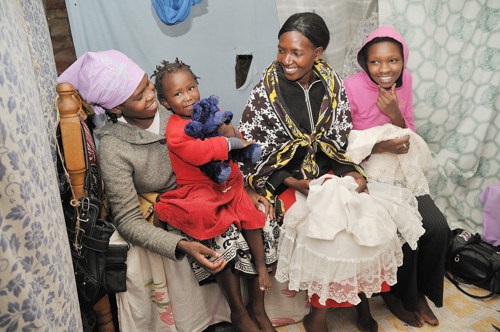 The room measured about 6 x 6 feet – a prison cell! It was slimy and muddy everywhere, the evil sewage and rotting vegetable smells and the ugly structures were not nearly as invasive as the, noise. It seemed like everyone in Mathare was competing to make the loudest noise, – every room had a radio on full blast as well as the changaa brewing and drinking dens which nearly outnumber homes.  Drunkards (all men) filled the street, and pestered us every few minutes, the community just ignored them as they stumbled down the hill. Children, some without shoes ran around and played in the mud, open sewers and picked through rubbish. After seeing where Jane has come from I can totally understand why she can’t stop smiling. 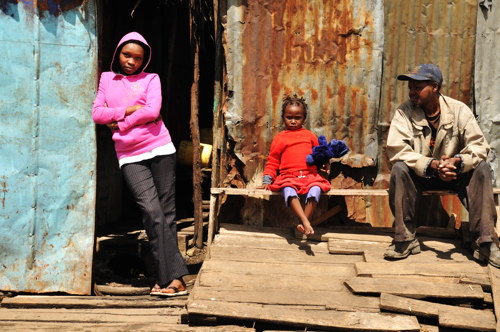 Her three children are no longer surrounded by filth and noise, changaa dens and drunkards. They play out doors safely, are clean and neat, and they go to school near home. This family eats well as they grow their own vegetables in a garden kitchen. And Jane is no longer just one of the million slum dwellers in Mathare, here in Kaputei, she is a respected member of a budding community. 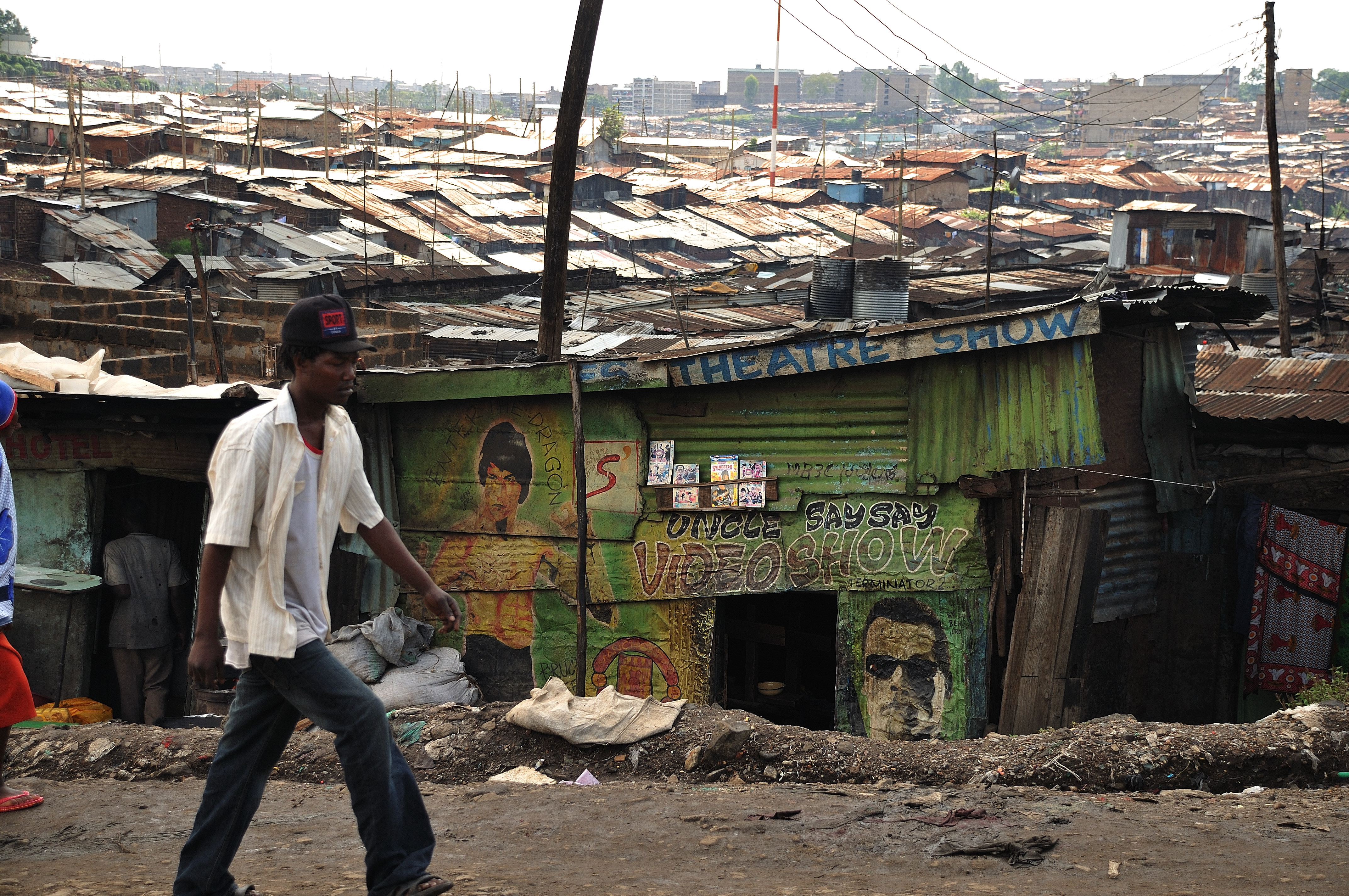 Janes life story is nothing short of miraculous.   Like everyone else in Mathare, she lived in the slum because she had no other option. When her husband took a second wife so many years ago, she walked out on him and headed for the city, four children in tow, including a baby. She thought she’d be able to get a job, but like many uneducated women her only means of survival in one of Nairobi’s toughest slums, was to use her body. That’s how she survived for many years, doing what she called “dirty business” living from hand to mouth in the filthy, noisy, congested squalor of Mathare Valley, with all her children crammed in one room. 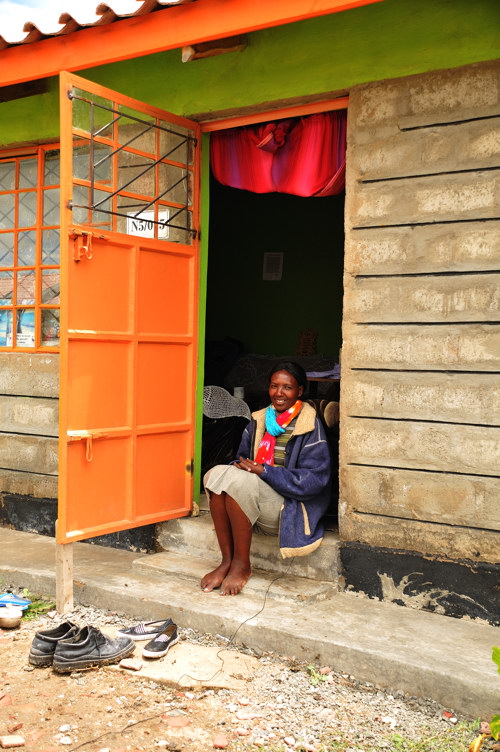 Jane is the poster child of microcredit success, it got her out of poverty and she says it saves her life. She got training and a loan from Jamibora, one of the largest micro credit banks in Kenya. Once she’d paid that back she got another loan, and then a third. This made her eligible for membership in a housing scheme, but first she had to rise 10% of the value of the house, Ksh35,000 ($450).  With her earlier loans she had bought a manual sewing machine, using that she made dresses and beaded jewelry for an international market.  It sounds easy but she says it was very hard to raise the money. There were hurdles along the way and at times she almost gave up her dream.  Perhaps the toughest was the election crisis struck in early 2008 when looters raided the slums and took everything she owned. Without a sewing machine she had lost her means of making a living.

So Jamibora gave her an emergency loan which enabled her to get back on her feet straight away.  Sitting in her proud two bedroomed house in Kaputei Jane glows, it’s hard to disbelieve her story. But there’s more. She wouldn’t let me go until I’d heard the whole story. After getting back her life the first time, Jane decided to find out what her HIV status was. Not surprising, it was positive. Despite this she was in good health, but again she asked God to help – she needs to live long enough to pay off the 20 year loan. She promised to help other slum women by giving free lessons in sewing, after all she never paid for her own classes. So far Jane has taught three others including Catherine.

Are you inspired?  Here’s a question, can you guess why Jane painted her house orange and green?