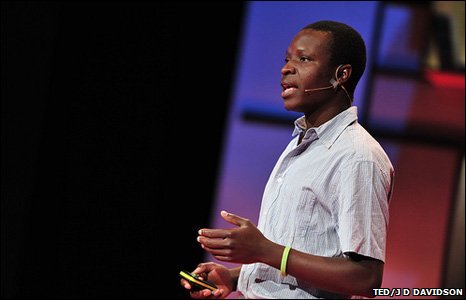 William Kamkwamba grew up as a farmer in Malawi, at the age of just 14, he had built his own wind generator.

During a drought his families fortunes collapsed and he spent his time in libraries reading and discovering about wind energy. He found components for his invention in a scrap  yard; a tractor fan, shock absorber, PVC pipes and a bicycle frame. 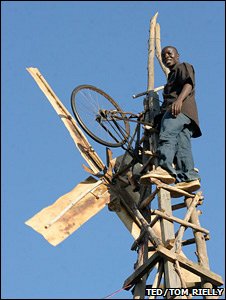 When his prototype was able to run four bulbs people arrived to charge their mobile phone. William has just appeared on TED  Global conference in Oxford this week to the conference to tell the audience how he did this.

Another inventor has already appeared on Afrigadjet and has just been discovered by the BBC. Pascal Katana, 22 who with Jeremiah Murimi, 24, has gone beyond fish and has invented a dynamo-powered “smart charger” to help people without electricity in rural areas to charge their cell phones. The system costs $4.50 and it takes an hour to fully charge a cell phone. 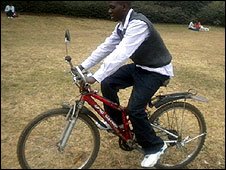 These two young men developed the idea during summer break. Wish I had so much energy in my holiday.  These guys should be at Maker Faire in Ghana this August.

10 thoughts on “Charging mobile phones with bikes and scrap”