Here’s another interesting idea from Dominic Wanjihia (see links to his other gadgets below) – the fuel efficient Sufuria. A sufuria is the aluminium pan that is used by virtually everyone in Kenya to make tea, ugali and for cooking vegetables. Like all pots that we use, energy is wasted around the sides of the pot. In Africa this is expensive as fuel be it gas, kerosene or charcoal  is expensive. 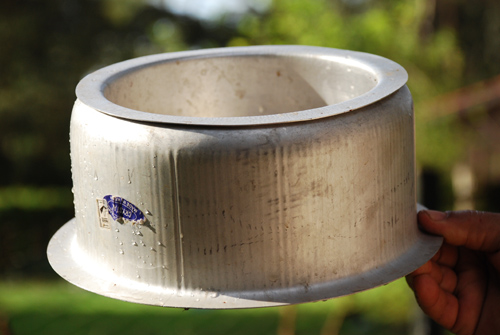 This is what it is comprised of – two sufurias to make one efficient one. Basically a hole is cut out of the bigger sufuria – and the piece cut out becomes the lid so nothing is wasted. To wash the sufuria you just dismantle the pieces by just slipping it out. The heat that otherwise escapes around the edge of the pan, is trapped between the cooking pot and  it’s sleeve.

Though it’s not in production, Dominic is using this sufuria at home and swears that it saves at least 50-75% energy on a kerosene stove (his estimate is based on how long it’ takes to boil water).