Imagineering is what it’s all about – wouldn’t you have wanted to build your own helicopter from scratch when you were 17 years old?

Joseph Omwoyo, a young Kenyan form-four student in Western Kenya, did just that and built his own version, using locally available materials. It doesn’t fly, nor does it look like it will ever take off – but what really matters is that a young boy with limited resources still had the energy to fulfill his dream:

“…Omwoyo says he got the idea while in Form One when he, together with his colleagues, toured the Kisumu Airport, and – during the short time there – the idea of making a chopper stuck to his mind”.

We’re sure that Kenya isn’t the only place where people are trying to build their own aircrafts, BUT! this certainly reminds us of the Kahawa West Aircraft story back in October 2010.

For Joseph, the helicopter may be his own escape from reality, or in his words: “Emargence Door Exit”. Touché!

Update: the original video has been removed by NTVKenya, so we can only hope it will be uploaded again in the next few days.

[Note: Somaliland is different than Somalia.]

These are the kinds of stories and projects that you just can’t make up. We’ve written about Nigerian Mubarak Abdullahi’s home made helicopter a couple years ago from old car parts. It appears that 3 Somaliland men built a helicopter too, using scrap metal and an old van engine.

Much like the Nigerian one, there is no video footage of this one flying. It’s not easy to build a machine that looks and acts like a helicopter, but it’s a lot easier than making one that flies. It does take a lot of drive, thinking and skill to build even these models, but I won’t be truly impressed until I see a video of one taking off and landing.

“The trio, Mohamed Abdi Barkadle, Saed Abdi Jide and Abdi Farah Lidan said the purpose of their helicopter was to be used to fight fire in the city and surrounding area. They receive no major sponsors, financial nor material support from any one including the government, it is a three men vision and ingenuity.”

Now, the question is… Could we get the three (and the helicopter) to Maker Faire Africa in Nairobi this August?

Yahoo! News (among other sources) carries a story from October 21st about Mubarak Muhammad Abdullahi of the Kano Plains of Nigeria who has built a working helicopter over the last 8 months using scrap aluminum and parts from a Honda Civic, an old Toyota and from the remains of a crashed Boeing 747.

This inventor has had no formal training in flying and his helicopter has never flown higher than 7 feet of the ground. In an interview, he talks about how the machine works: 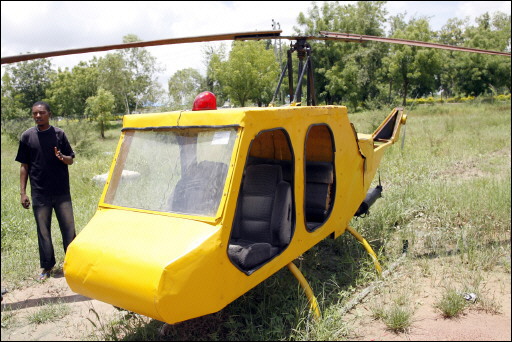 Mubarak is ambitious however and has embarked on a new project to build a better helicopter that will be able to make 3 hour flights. He hopes to get support for his project from the Nigeria Civil Aviation Authority (NCAA) and other Nigerian government bodies. 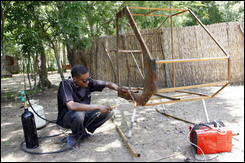 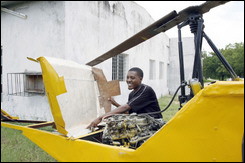