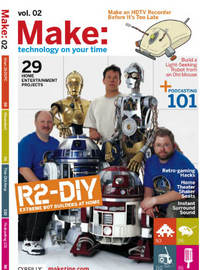 MAKE magazine is the epitome of Western gadget and technological home-made ingenuity. MAKE magazine is very much the American version of AfriGadget. I love the magazine, it’s one of two magazines that I subscribe to.

What’s different about African mechanics and gadgetery is that it’s generally made with much fewer, and more basic, materials. Where you might find a story on how to make high-tech robots at home in MAKE, it’s counterpart in Africa might be how to create a bicycle out of wood. No less ingenuity needed, but far more useful for an African’s everyday life.

A post by Emeka Okafor of Timbuktu Chronicles was the catalyst for this post (and from which I stole the title). He makes the point that Africans are already doing what their counterparts in the West have a sudden new found interest in. They might be doing it in a rather rough way, but with some nurturing it could create a “climate of interest” and growth in African industrialization.

A MAKE for Africa will be a non-limited set of values and practical ideas that evolve, germinate, propagate and replicate with informed nudges…

So, there is a “MAKE philosophy” already present in Africa, one that continues to grow and evolve in sophistication. What we need to do is showcase that ingenuity. Doubtless, many Americans and Europeans will be amazed at some of the simple answers to everyday problems coming out of Africa.

8 thoughts on “A MAKE Philosphy for Africa”